You are here: Home > Mancunian Baroque by Andrew Shanks 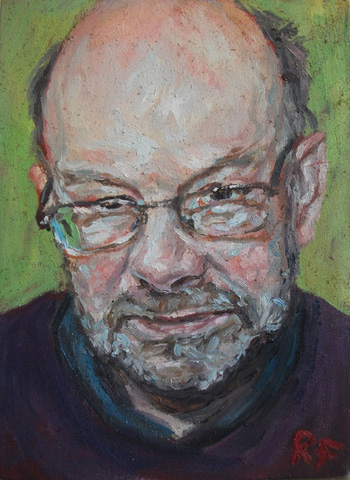 Mancunian Baroque:
the element of truth in Rob Floyd’s ‘Stations’

Here we have a series of theatrical images, strangely full of the milk of human kindness.

‘Stations of the Cross’: is this not intrinsically a kitsch enterprise? So often, yes of course it is. And yet, look: no, it need not be. Rob Floyd’s ‘Stations’ are an exuberant invitation to look again at the ‘Stations’ tradition, and glimpse fresh possibilities in it, after all.

(The same is also true, in quite a different way, of Ghislaine Howard’s ‘Stations’; previously hosted by Manchester Cathedral, in 2010.1 Far from being intrinsically kitsch, here indeed, it seems to me, is a genre still rich in yet-to-be-explored potential.)

There’s a seductive school of thought – in my mind, linked for instance to the memory of the late John Tavener – according to which the art of the Renaissance, in general, was a theological disaster. ‘Back to Byzantium!’ is the cry of those who hold this view. That’s to say, back to the icons of the East: those gracious, not at all theatrical, quiet presences, which melt, so much more easily than any sort of post-Renaissance art, as such, into the sacred ensemble around them.

Rita Nakashima Brock and Rebecca Ann Parker have gone further: deploring what they see as the disastrous turning point in Christian art, towards death-loving theatricality, initiated way back in the mid-10th century with the first ever large public crucifix showing Christ dead on the cross, the Gero Cross in Cologne Cathedral.2 And yes, especially when one considers the tsunami of kitsch propaganda-art that begins in the period of Counter-Reformation Baroque, one may well be tempted to agree. That splendid thug Caravaggio was, to be sure, a great genius. As was that rather grand gentleman, Rubens, also. With an awe-inspiring theatrical flourish, their work loudly proclaims their genius, along with the glory of the institution that had commissioned it. Yet it leaves me, at least, wondering: how much actual gospel-truth can survive in the proximity of such boastfulness? And then, consider the work of their innumerable epigones! I think of the baroque churches of Prague, for instance: the new German, Catholic masters following up their military victory over the old Czech, Protestant establishment, now, with an artistic onslaught, a great taunting extravaganza of paint and sculpture, all meant to reinforce the lesson of their supposedly heaven-sent predominance, perversely invoking the name of the Crucified. Observing this, one may indeed well sympathize with critics urging we uproot the very possibility of such shameless bully-art – and so rip up the whole tradition out of which Rob’s work, also, grows.

But then, again – think of Oberammergau, the passion play. I haven’t seen it. Judging though from what I’ve heard, there are surely two quite different things happening in that folk-religious phenomenon.

On the one hand, originating as it does from the 17th century, it represents very much the same old Baroque propaganda-project, only in another form. ‘Oberammergau’ has now become a massive commercial brand; in the service of the larger power-brand, ‘Roman Catholicism’. For the purposes of crude brand-promotion, the play has indeed always included a large element of theological antisemitism, only quite recently purged away. This is typically symptomatic of the underlying corruption, inherent in any form of church-ideological propaganda: once one has stepped into the domain of mere propaganda, such hate-filled tropes, alas, become all too natural. After all, the whole rationale of propaganda, as such, is to trigger prejudice, both positive and negative.

Yet, on the other hand, there clearly is something else going on, at the same time. Vast enterprise though it has become, the passion play still remains a work of amateur dramatics. Yes, it’s a propaganda-enterprise; but a delightfully amateur one. Only residents of the town are qualified to perform in it, or indeed to participate in its administration. These actors aren’t ‘stars’. They remain a group of neighbours. And isn’t this, after all, quite crucial to the symbolic meaning of the performance? No doubt it could all be sharpened up by having a few really gifted celebrities hired in, from outside, to play the key roles. But then something would be lost. Something quite crucial, in fact: the tremendous celebration here of sheer ordinary neighbourliness, which is, in the end, the core theological truth-potential of the event, still abiding underneath, and entirely in spite of, its church-ideological propaganda-veneer.

What appears in Rob’s paintings of the ‘Stations’ is just that second element, alone.

Thus, these paintings have all the theatricality of the Baroque tradition: all the immediacy, energy and urgency which that tradition delights in. They’re large, bustling Baroque images. But, by contrast to classical Baroque religious art, they seem mercifully free of any conventional propaganda-intent. They aren’t kitsch, the way classical Baroque work tends to be kitsch. At one level, this is simply a matter of style: it’s because they aren’t at all slick. The classical tradition always aims at a certain sort of slickness, the slickness of meticulously finished paintings, often lavishly framed. Rob, to be sure, takes plenty of time preparing his paintings, getting them clear in his mind beforehand; but, by contrast, he finishes them very quickly. He doesn’t spoil them by overworking them. And they remain unframed. In short: they have none of the kitsch pretentiousness generally bound up with the propaganda-purposes of classical baroque. There’s a quite un-Baroque element of humility informing them.

Moreover, Rob also has a remarkable flair for portraiture. The figures in these paintings aren’t glamorous representations of general human types. They’re portraits of particular individuals. Rob doesn’t just paint the role; he paints the actor performing the role. That’s to say, he paints his friends. And the result is, very much, an affectionate celebration of human individuality – the individuality of the actors, transfigured by the roles they’re playing in the sacred drama, but still quite plainly recognizable within those roles – just as one might recognize one’s neighbours in a work of local amateur dramatics.

It’s the faces that really catch one’s eye in these paintings. They’re what determine the colour range, inasmuch as these are images composed, so to speak, in the key of pink face-flesh, lit up. The mood of each work derives from the mystery of the faces: deep down, what are these people thinking? Rob’s imagination is, as I’ve said, awash with the milk of human kindness. To place these portraits in this sacred context is simply the most eloquent possible painterly honouring of those portrayed.

Indeed, I’m still chuckling, inwardly, at the photograph he was using as a basis for his climactic painting of the crucifixion. In order to get the composition technically right, the passion-play scene had been staged in his attic-studio: Christ on the cross almost bumping his head on the pitched ceiling; the other figures, all crammed into the only-just-adequate space, caught in a shaft of sunlight falling through the Velux window. I gather Rob had almost broken his back dragging the beams of the cross, old railway sleepers, upstairs. If the end-result had been a pompous painting – well then yes, how simply absurd a scene!

But look at it. There’s nothing pompous here. In this image of a huddled group of friends, the depiction of the divine comedy has, after all, drawn in and absorbed so much real tragedy, along the way. The staged scene truly, and reverently, gestures towards the vast reality it’s meant to incorporate.

Here we have an old genre refreshed, not only in style but also to some extent in content. The monochrome night-time image of Christ on the cross, in which the circle of his halo echoes the circle of a full moon above, is stylistically distinct from the main series, but is an off-shoot. It proclaims the dream-dimensions of the story; its poetic polyvalence. Jesus also appears, in another un-canonical image, gazing on a skull. For, at one level, this is a story about the primordial divine overthrow of Death itself, understood as a principle of despair. Again, the painting of the two angels which appear to Mary Magdalene in John 20: 11—12 is an unconventional, and in fact somewhat uncanny, direct representation of Christian hope. (Never, perhaps, have angels seemed so human! Even in this case, Rob’s art foregrounds the humanity of the actors playing the role.) And then there are two paintings which are, I think, direct invocations of a hoped-for ultimate apocatastasis: an eventually all-inclusive Atonement. Thus, if God-in-Christ, the primordial Scapegoat representing every scapegoat, is, as such, revealing the sheer folly of our universal human impulse to make scapegoats of each other – since this, symbolically, means killing God – what, then, does that imply for how we think about the villains in the Passion story? We surely can’t let them be mere symbolic scapegoats, either, for the wider criminality which their actions represent. What about Pontius Pilate? – Here, he’s portrayed asking the elemental question, ‘What is truth?’ with real, and poignant, bafflement (John 18: 38). What about Judas? – Rob paints him deep in conversation with the risen Christ. True, the rope with which he’s still about to hang himself is draped across his shoulder. Nonetheless, observe: he’s not rejected.3

Rob’s an admirer of the great Irish writer John Moriarty.4 In Moriarty’s prose-poetry we’re confronted by a truly flamboyant, reconciliatory and celebratory vision of divine creation, as such: the whole caboodle transfigured by a wide-ranging philomythic gaze. It seems to me, these ‘Stations’ represent the same.5

For my part, I must confess, I’m just about as allergic to classical kitsch Counter-Reformation Baroque as anyone could be. Yet, here’s a 21st century mutation of that same tradition from which, somehow, all the old propaganda-poison has been beautifully drained away. And only kindness remains.

There are Hindus who would call it the Koshaless [beyond-all-veiling] skull.

And, looking down into it with Jesus, we might, with the Chandogya Upanishad, say: