You are here: Home > Articles > Piece by Novelist Tom Bailey 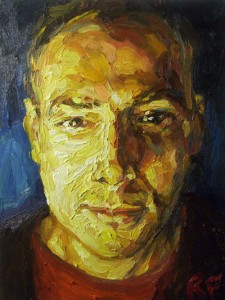 Rob is a portrait painter. That is, he is a painter of people – particularly their faces. His subjects include public figures, a philosopher, a cleric, friends, his wife, young child and the artist himself. Rob is able to look at the human face and absorb and understand something of the character inhabiting that face. He is a reader of human expression. Like any good reader, Rob has a keen sense of perception. A good artist, however, requires much more than this. Rob is able to take what he reads in others and combine this with something of himself.

This process can result in paintings which are arresting, out of the ordinary, at times transcendent. (Look closely at the light striking the child’s face, at the look in his large eyes; then at the woman in the green shawl – again, it’s the eyes, and the light.) Rob Floyd is not only a painter of portraits. Flowers recur in his art, (as they do in that of a notable antecedent.) Some of his most popular pieces depict church roofs, with bright blue skies, or symbolist cityscapes. However, the portrait is at the centre of Rob’s work. The human face – perceived, examined and finally transfigured into art.